Brooks’ law on software development says : “adding manpower to a late software project makes it later”. Brooks adds to his law that “Nine women can not make a baby in one month”. Is there a similar law for development?

I could propose two options:

While option 2 is tempting, I fear it would be difficult to prove this option in a way it would stand scrutiny; Option 1 is an  open door I want to walk through.

Of course, as Brooks himself states, the law is an “outrageous simplification”, and further points to two main factors that explain why his law works all too often (wikipedia) :

The picture is easy to recognize : the 2 or three main players in a development field know each other so well they don need to meet except for a beer. Indeed: it is a jungle out there, and the fight for funding is harsh: you must know your competitors. The odd outsider claims there is a need for coordination and what used to be a working, informal process must be reported on and formalised.
The Lilliput  partner brings his “important” expertise and money on board, but must be consulted in all important matters. Everybody gets bogged down in coordination meetings.

Lilliput partners at the table

There is a good case for involving donors 1 to 3 in a coordination effort from the start. But what is the added value for the humanitarian results to invite one of the group 4 to 6? Sure they might have some specialised insights, but shouldn’t they be invited more punctually? And why invite the donors grouped under 7? Their contributions are close to the margin of error in the calculations of the others.

On the other hand, donors 4 to 6 have a very strong case to want to be involved, as they can free ride on the work done by the strong partners: studies, needs assessments, feedback from the field. Pure gold for the free rider. We might hope the donors grouped under 7 wouldn’t even bother.
Taking into account all coordination costs, it is probably better to keep the contribution of the fringe donors outside than to have them inside.

The picture for data per “appealing organisation” is as interesting:

In the area of direct food assistance, USD 24.1  million has been contributed, of which USD 22.8 million was going to WFP, some 94 %. It seems coordination on food assistance is just a waste of time. For the overall effectiveness of food aid, the internal management of WFP activities is much more relevant than the effects coordination could have. Why is WFP a reluctant UN-reformer? Perhaps because they want to have results with the group they are supposed to help, hungry people, and not just with any nobody that might show up in the field claiming they distribute food.

I am not saying that the small agencies or small NGOs are irrelevant: far from that: they are the ones innovating, reaching the victims most difficult to reach, challenging the effectiveness and efficiency standards of the juggernauts (and dinosaurs). A coordination effort draws them in the mush that general consensus is, with a risk of conforming to the mainstream. It might even be a prerequisite for coordination to comply with what is generally accepted.  To get a share of the pie distributed at the coordination table, you have to pay the dues.  They could end up selling their soul for being allowed to play with the big boys.

It is not safe to assume that participants in a coordination mechanism share a common development goal. Indeed, sometimes one organisation is interested to push local ownership, while the other one pushes its own valuable and unique expertise. Coordination is more and more seen as an objective to aim for, not just as a means for better delivery

In our example, food assistance to Niger, the goal might be shared.
The different actors have some leeway to take decisions in country, but if push comes to shove, they are executing what their headquarters decide, sometimes in detail, sometimes only the general principles.

At the coordination table the organisations will do what they are supposed to do:

Moreover, the individual participants will have their own private agendas, priorities. Some might want to stay in the country for another year, others just want to leave. Alliances between institutions and friends are struck.

All these elements will be at play and deflect attention away from getting the results for the beneficiaries. In normal circumstances, the moral fibre of the humanitarian or development workers and institutions will limit the damage. With more partners, the risk to have somebody at the table who speaks only out of organisational self interest increases.

In a typical humanitarian crisis, the UN classifies the aid in 11 sectors. Most organisations are active in more than one sector, so they must go to the different meetings. Agencies with a wide scope complain that up to 30 % of their in country management time is spent in coordination meetings (no hard data, no impact nor efficiency evaluations I know of). Smaller organisations could just stop working.  In an important humanitarian crisis, the number of international actors in a well funded crisis is important:  22 in Niger, more than 100 in the DRC. The number of permutations becomes infinite.
Jean-Michel Severino and Olivier Ray present this equation in a telling graph in their publication “The End of ODA (II): The Birth of Hypercollective Action”: 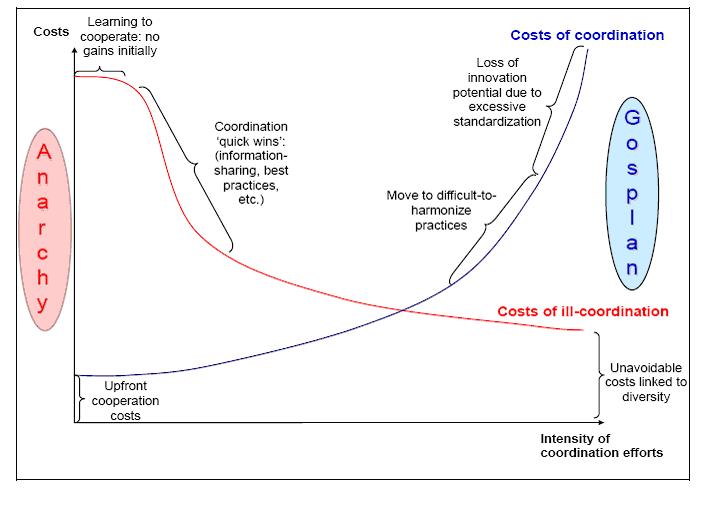 Should we coordinate?  Of course we must coordinate, but the objective must be more efficient aid, not coordination in itself. I would beg for more attention to levelling the playing field for all actors in the market by opening up all information, instead of trying to coordinate with everybody. Standardising information and have a transparent system for sharing is necessary for accountability purposes anyway, and could fulfil a lot of the needs that people wish to satisfy with coordination.  On the push for coordination at all costs, II would like to quote W.  Easterly in his immortal piece “Tower of Babble”:

“Coordination” and “partnership” are the equivalent in foreign aid of U.N. resolutions for world peace. Every different national donor, U.S. government bureaucracy, or private business has its own agenda, will not voluntarily sacrifice its own interests for some other organization, and there are no binding contracts to enforce any such sacrifices.

If developments results are elusive, adding an extra partner to an existing  coordination mechanism only detracts attention from getting results.

Moreover, the explanations stand in principle. In development there is also a third clause:

This site uses Akismet to reduce spam. Learn how your comment data is processed.